Ear pain can be due to many causes. Few of the common conditions encountered in day today practice are as follows. Most common cause is impacted wax in the ear canal. Other causes can be foreign body in ear canal, fungal or bacterial infection, common cold and trauma to ear with stick or ear bud.

Ear discharge can arise from the outer ear canal or from the middle ear through the perforation in the ear drum known as otitis media.

Otitis externa is the condition when there is infection in the external ear canal skin, it can be a generalised swelling in the canal skin or a furuncle. If the hair follicle of the canal skin is infected, it forms a small localised painful swelling called furunculitis, and when it ruptures there is discharge from the ear.

In otitis media, the middle ear is filled with fluid or mucus. If the mucus gets infected with bacteria, it causes an ear infection which may be acute or chronic. Various causes of otitis media are common cold, blocked eustachian tube (ET) due to enlarged tonsils or adenoids, blockage of nose due to structural abnormality or diseases like nasal mass and sinusitis, etc.

Chronic otitis media is caused by an initial episode of acute otitis media, and its main symptom is a persistent discharge from the ear. If eardrum becomes perforated, one may experience some hearing loss, although this should resolve once the infection has passed and the perforation heals. However, if the perforation persists, it may lead to permanent hearing loss and problems with language development in children.Otitis media is diagnosed from the symptoms and by examining the eardrum with an instrument called an auriscope, or otoscope.

Examining the tympanic membrane gives some clues as to what is happening inside the ear. The examination will also show whether eardrum is perforated or not. It is advisable to get the ear checked with an ENT surgeon.

Antibiotics may be prescribed to treat otitis media in cases where the infection is severe or where it gets worse after two or three days. A long-term course of antibiotics may also help to prevent long-term or recurrent otitis media. Painkillers may be used to control the symptoms of otitis media (pain and fever). Nasal drops containing decongestants may be used to reduce the swelling of the mucous membranes in the nose and back of the throat. This may help to keep the Eustachian tubes clear, and allow mucus to drain from the middle ear. Drops containing antibiotic medication have been shown to help reduce the amount of pus that comes from the ear. Standard treatments for chronic otitis media include debridement, topical ear therapy and dry ear precautions. In those cases that do not result in spontaneous healing of the TM with conservative measures, surgical intervention is considered.

Ear blockage can be due to wax, foreign body in the ear canal, swelling in the canal or pus or fungal debris. It can also be due to fluid behind the ear drum or a block in the Eustachian tube. This may happen after a pressure change such as a flight or diving. Examination of ear, nose and throat is needed to know the cause of ear blockage, and accordingly the appropriate treatment can be taken.

Decrease hearing can be a mild, moderate or severe hearing loss. There are different causes for loss of hearing. An impacted wax in the ear canal can also cause mild hearing loss. Perforation in the ear drum, fluid behind the ear drum or degeneration of auditory nerve, usually age related or following certain illnesses are common causes.

Ringing in the ears / tinnitus

Tinnitus is a condition of ear when a continuous sound (ringing or beep) is heard apparently coming from the ear or head. Tinnitus is a relatively common experience and the great majority of peopledo not complain about it later.However, when it is persistent or loud, it can be very distressing. There are different causes of tinnitus. It can be due to causes with in the ear or outside the ear. Some of the medicines which are toxic to the ear can cause tinnitus. It is important to rule out the causes of tinnitus by examining the ear, audiometry when associated hearing loss and radiological investigation if needed.

Vertigo is not a disease. It is the sensation of rotatory feeling, spinning of the surrounding or imbalance. One of the functions of the ear is balance. The inner ear is sensitive to change in position of the head. There are small particle like structures in the inner ear called otoliths, which are responsible for perception of change in position. When these otoliths get displaced form its normal position and move in the inner ear, when the head is moved, it causes vertigo. This type of vertigo occurs when the sufferer lie down in bed on the affected side of the ear, on bending downward or looking up. It is diagnosed on history and clinical examination. Few positional manoeuvres are done by ENT doctor to replace these otoliths back in normal position, which usually settles the vertigo.

Bleeding from ear will generally occur after trauma to the canal skin or the ear drum, most commonly when people try to clean the ear with stick. It can also arise if there is infection in the ear canal or ear drum, swelling or mass in the ear canal etc. Examination of the ear is advisable to rule out serious causes of ear bleeding and initiate appropriate treatment. 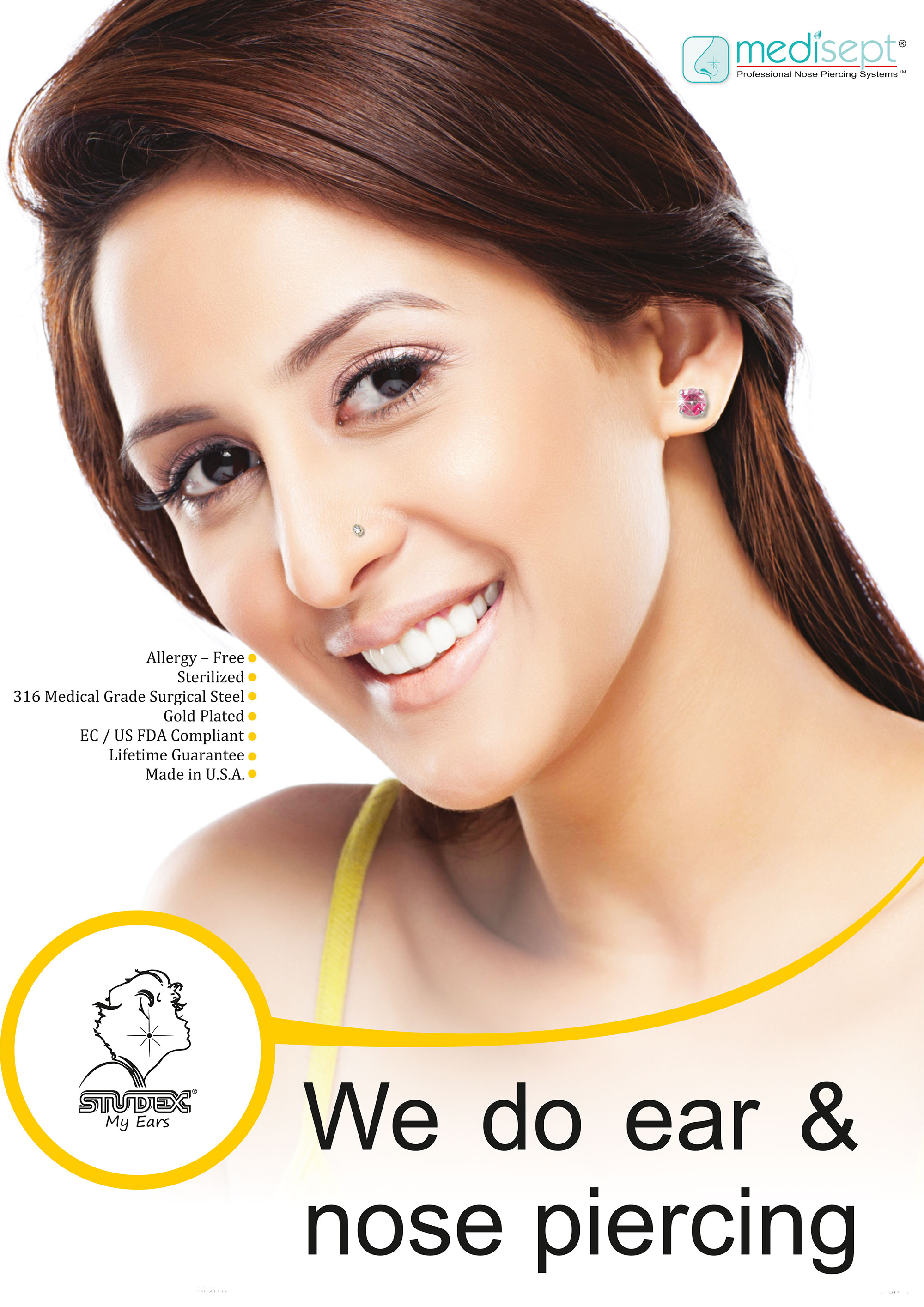 Studex System 75 combines the highest hygiene and sterility standards with optimum ease of use. With System 75, Studex has taken ear piercing to an entirely new dimension. Perfectly hygienic, barely noticeable and allowing for great ease of use, ear piercing has been completely redefined for ear piercing specialists and customers alike

Impress your customers with a gentle and smooth ear piercing experience. Studex System 75 is ideal also for children due to its precise engineering, beautiful piercing earrings designs and silent piercing process.

Compared to other instruments, Strudex system 75 no longer "punches" a hole, it pierces the ear in a gentle and tissue friendly manner.